Frankfurt am Main, 10 February 2021: The digitalisation and networking of entire factory floors and the new processes in Industry 4.0 scenarios are raising ever more questions surrounding the role which employees play in this environment and how their supervisors need to respond. Above all, the dynamics of production lines supported by artificial intelligence (AI) necessitate giving human beings working at machines greater decision-making authority and responsibility than many organisational charts provide for at present. For their part, the supervisors, relieved of routine activities by the algorithms, must cast off their classic control function and shift their emphasis to the role of coach. Industry 4.0 will have more far-reaching consequences than many think. Most experts agree, however, that this should not be taken as grounds for delaying the digitalisation process. Indeed, the sooner this is started, the better. As a consequence, METAV digital from 23 to 26 March 2021 will be presenting many solutions in the field of Industry 4.0. and Work 4.0. 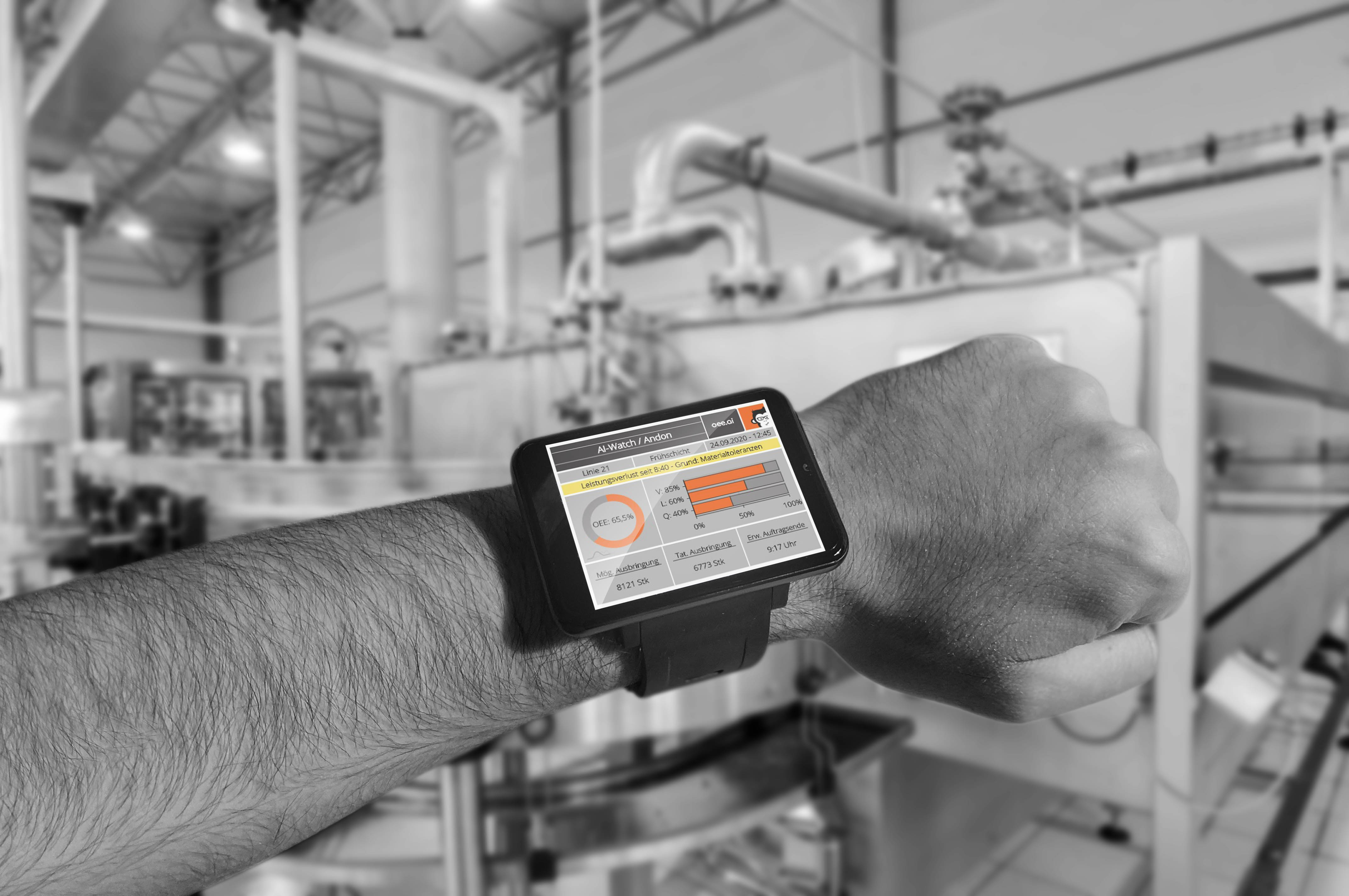 "Over the past eight years, we have seen that Industry 4.0 projects are not just about technology. They can be soundly designed from a technological and planning viewpoint, but they also have to gain the acceptance of employees," explains Prof. Gisela Lanza, head of the wbk Institute of Production Science at the Karlsruhe Institute of Technology and member of the WGP (German Academic Association for Production Technology). Work 4.0 has practically put itself onto the agenda: scientists have had to address aspects such as acceptance, motivation and new role distributions in the digitalised factory. The clear result so far: in the age of algorithms and artificial intelligence, and with 100 million euros in funding programmes for autonomy and smart services, 26 SME competence centres funded by the Federal Ministry of Economics and over 300 examples of application currently in production – all these confirm the 2,500-year-old wisdom of the Greek philosopher Protagoras: Man is the measure of all things.

In production, real-time control and algorithm-supported monitoring require rapid decision-making. Aachen-based Ifp-Software GmbH offers a program for networking and optimising production lines. The company appreciates METAV digital as a platform for showcasing its possibilities to potential new customers. An algorithm uses time series to calculate probable sources of error and sends them to the mechanic within seconds. The system raises plant output by up to 30 per cent – while also motivating the employees. Jörn Steinbeck, co-founder of the company, explains the impact on everyday work on the shop floor: "We work in real time, and a finely-calibrated algorithm can suggest solutions within seconds." But if the workers have to run to the foreman with this information in order to get instructions, "then any time gained is lost again." Basically this means that if the possibilities of AI applications are to be fully exploited in practice, "employees must not only be allowed to make more far-reaching decisions, but also have a greater understanding of the overall system." Steinbeck's conclusion: "We're moving away from control to context." Or as Lanza puts it: "Employees need to be given sufficient personal responsibility to correct the error immediately themselves. "

Sebastian Weski, Sales Manager at Exapt Systemtechnik GmbH in Aachen, has had a similar experience. The company has been developing and distributing CAM systems since 1967. It also provides intelligent resource management for the machining industry. The complex program stores intelligent workflows which allow tool requirements to be responded to and stock movements and set-up optimisations run automatically. As a result, the software company is already achieving productivity increases of up to 30 per cent, and interested visitors to METAV digital will be able to see demonstrations of the solutions. Even state-of-the-art CAM applications only run effectively if the machine operators have greater responsibility and direct decision-making power. "Our system allows trial runs with a digital twin. The mechanics can see straight away if the tools are scratching the surface, for example, or whether the feed rate is too high. They immediately report this back to the CAD programmers. Our software connects the people at all the different points in the machining process," Weski explains. And that means: more responsibility, more competence, more decision-making power for the machine operators.

"Manufacturing thousands of different products and variants down to batch sizes of one without costly plant conversions" – that is the vision at Bosch Rexroth. In 2019, the Bosch Group achieved a 25 per cent increase in its sales of networked Industry 4.0 solutions for manufacturing and logistics to 750 million euros. This vision can only be achieved with the help of intelligent assistance systems. But the latest generation of collaborative industrial robots (cobots), too, requires a new corporate culture and flatter decision-making structures. Müller Maschinentechnik GmbH from Düren sells lightweight robots that support mechanics in various task areas. An "ecosystem" of tools has developed around the apparatus: the metal helpers load, palletise, weld, mill or grind, depending on the requirements. All interested parties are welcome to watch digital demonstrations of the full range of possible applications at the METAV. Pascal Klee, Sales Manager Automation, emphasises: "Cobots are designed to work together with humans. Together they can operate a whole production unit instead of just one machine." It's about networking, not about replacing human employees. On the contrary - the possibility of cooperating to produce even small batch sizes profitably gives the company a decisive competitive edge.

However, it is not only the production workers, but also their supervisors who are confronted with fundamentally new demands. In the joint interdisciplinary teamIn project, researchers from WGP collaborated with two industrial companies to find out how to integrate digital technologies and AI meaningfully into the production process. The researchers are focusing primarily on the new role of the supervisor and are pursuing four sub-goals: The task is to develop suitable digital management tools – an AI agent that relieves supervisors of the need to perform mundane routines. In addition, the team has set out to design modern management systems and to examine the effects on role models and competence requirements. In the final step, the researchers will design a complete transformation process. The results will be fed into learning workshops and then be accessible to all companies based in Germany. Gisela Lanza explains: "The aim here is for company representatives to consult with the pilot companies and to pick up some new ideas. Based on a best practice example, the company sees which elements and tools are available and then adapts them to its own problem." In the workshops, the researchers even simulate new hierarchy models in a game environment, for example a scenario with no boss in which the employees have to organise the shop floor themselves.

The researchers have already identified a number of trends: the system boundaries for each individual are being extended. "Mechanics who previously operated a single machine will in future orchestrate the entire line," summarises Lanza. "The foreman will take care of the entire plant instead of just one line, and the plant manager will be responsible for the entire supply chain." Jörn Steinbeck contributes his own practical experience: "Our intelligent systems accumulate experience that used to reside with the foreman. A well-trained algorithm democratises expertise." This, of course, has an impact on the corporate culture. Classic top-down decision-making and complex hierarchies are too cumbersome for agile production groups supported by algorithms and intelligent assistance systems. Quality assurance alone can push conventional instruments to their limits – monthly reports are of little use if the software reports errors and anomalies in real time. The manager then transforms from an instructor into a coach. The learning systems are increasingly taking over the classic problem-solving competence of the foreman, and the machine operators are solving many problems themselves. For this, they need the supervisor less as a controlling authority and more as an assistant who offers support. Lanza submits: "In the past, we thought only centralised units worked effectively. But in the future, we are expecting to reach optimality despite the decentralisation."

Log in with your online ticket and attend over 90 web sessions presentations free of charge!

Save online ticket to the METAV web sessions

The participation is free of charge!